It’s late in the afternoon; five men with stylish suits and distinctive hats are sitting on a few luxurious Chesterfield sofas. Despite all windows and shutters being firmly closed, the five individuals are smoking the best cigars from Havana, waiting patiently for your arrival. Here you come, slowly wafting through the heavy smoke as you approached your Victorian desk.  After taking your seat, you clearly describe your intentions for the city of New Shore. “We are going to own New Shore, capisce?!” Now get to work in. . . .  The Commission: Organized Crime Grand Strategy.

The Commission: Organized Crime Grand Strategy is a turn-based strategy game developed by
302 Interactive and published by 2:30 AM Studios where you take control of one of the five families who want to take control of the city of New Shore. 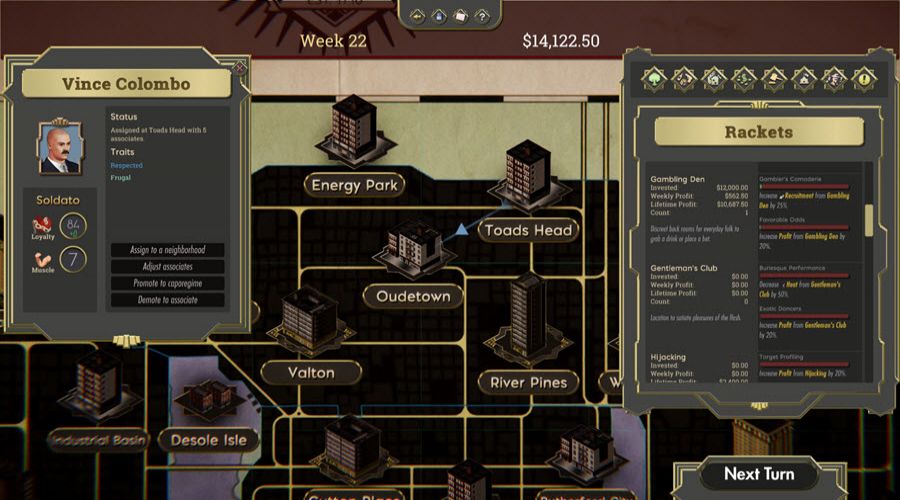 Before you start a game, I strongly suggest jumping into the tutorial which will outlay the basics of the game. It will only take roughly ten minutes to complete. From here, you’ll have to choose which one of the five families you’ll be playing as. Each of them has a specific trait, and it will be up to you to choose who you will be representing in the city of New Shore.  Then it will be time to adjust the difficulty level; there are four available, from Easy to Insane. If you choose to play on the Easy level, you’ll have a small advantage the other families, but if you decide to play in the Insane level, you’ll be at a considerable disadvantage compared to all the other families. However, you can decide to play against one or all families as part of the difficulty.

From here, it will be all about how and where to place your troops within the city of New Shore. The city is divided into five different districts. Each of the districts has eight suburbs, and all of them are classified from poor to rich and from low to high density in terms of people.

At the start of the game, you’ll only have two caporegim (or henchmen, if you prefer) and each of them will have two soldatos with them. First, you’ll have to assign both of your henchmen to one of the five districts available. Then you’ll be able to deploy each of your soldato to a specific suburb within the district. You’ll also have a certain number of muscles (or subordinates, if you like) who you can allocate to your soldatos

When you’ve done that, you’ll be able to start purchasing rackets from the 17 available to you. Each racket will cost a specific amount of money to build, and will tell you what sort of profit you’ll get. You can invest additional funds into each racket per turn (as long as you have enough money in your pockets) and therefore increase the profit every single turn.

The small issue is that the other families will ultimately send their own caporegime into each of the districts and suburbs and start their own rackets.  As soon as you start running rackets in a specific suburb, the police will start to be more active, and the heat within the district will start to rise. So, image when one or all the other families start to do business in the same suburb, the heat will hit the roof and you might even have your caporegime or soldatos arrested if you are not careful. Thankfully you can decide to stop your rackets for several turns to decrease the heat within the suburbs and avoid arrest.

The police are one thing to worry about, but the biggest threat will undeniably come from the other families who set up shop in the same suburbs. You can keep the peace, but it will dig into your profits, or you can just go to war against them! Bear in mind that being at war might also bring a lot of pain to your operations. Not only will the heat be sky high every turn, but you might lose some of your operations, too. The worst case is to have all your muscles killed and your soldato interrogated for further information on your caporegimes and soldatos. However, if you manage to eliminate all enemies, you will be the one who gets information on the other family henchmen. Gather enough information and you’ll be able to initiate a hit on one or more important people of the other families.

You’ll need your level up your Don (the head of the family), which is achieved according to how many territories and businesses you own, in order for you to be able to promote new caporegimes and soltados into your rank, and it can take a bit of time to do so.

As you accumulate wealth, you can also bribe important people, such as the police chief, district attorney and other key figures, but it will take a big chunk out of your profit every time you do so, and it only will last for a certain amount time.

Nice graphics, and the soundtrack is totally adequate and emphasises the overall theme of the game, which is brilliant. There is a bit of managing to do in this game, and you’ll have to do it throughout all the individual suburbs every single turn in order to combat the heat and the families, as well as invest more money on rackets that will give you more profit the next turn. It will take you a little bit of time to fully understand how the game works, but you have a great gamepedia available to you to help you out.

It’s time to take over the city of New Shore, my dear associates and other families. . . Well, forget about ‘em, in The Commission: Organized Crime Grand Strategy!